This is what I have learned myself the hard way through life. When all else fails, ( in my case building model ships, etc.. ) I find that its back to the drawing , and first establish what it was I did wrong, and why did I do it. Secondly don't be to hard on yourself , that will get you no where. Next , think what  to do next time ,and this my take some reading as to some solution to the problem.

I have found that in myself,sometimes I don't ask enough questions about a project or situation that I am involved in, and I have come out short, and hung out to dry, ( so to speak ) This is not good. So the solution for me that is, is to sit down and write out all the questions I can think of, and see that I  get answers, and write down the answers to the questions. One thing I have found out recently Is that people that you may be dealing with, wont offer you any information on a particular situation, unless you ask them flat out what you need to know, and have it spelled out in a contract.

You see old people don't know everything,like some think. ( that's because I’m  one of them )

Posted by Bob Crosby at 4:10 AM No comments:

I am still Alive.

Hi ; I’m still alive, been to busy lately, almost 79 years old, but seem to be busy most of the time.( also forgot how to get into my blog,) but now here I am.

Been making a model of  H.M.S. Bounty lately,making it all from scratch. Got a set of plans from the guild, and went from there. I had a bunch of oak edgings given to me, so after sawing them down to a certain thickness, I glued them up to pieces 6’’ to 8’’ wide, then had them planed down to 5mm thick. Made patters of all bulkheads and keel, and all other parts required , then proceeded to cut out parts on my jigsaw.After assembling all bulkheads on keel as they should be, I proceeded to plank in the hull. I made planking out of basswood and pine, 5mm. w x 1.5 mm. thick.

After setting the frame of the hull in line with the waterline, I proceeded to strike a line on both sides of the ship for the deck line, and started the planking from there going down to keel line. Some places I used wood dowels about ( 1.5mm) and pegged where needed. Have to say it was tough going in some places, but I made it. I make my own dowels out of stripes of wood either on my wood lathe or on my drill press, and can make them as I need them. After I finished the hull, I planked the deck, ( I now know what the term”Plank the Deck” means , plank the deck! ) O.K. As I did the deck, I had to set the masts in place, and deck around them, as masts had to be in the right angle of the ship. I made all the masts, booms, and their fittings out of oak on my lathe, sanded and varnished  them all after in place. I made the dead eyes out of oak with a 1/4’’ plug cutter on my drill press,  set them on the hull with wire fittings as required , and as shown on plans. Some detail I made up my self, a privilege  some of us take at times we don’t agree, or we just don’t understand,( probably  ‘’don’t understand, that’s why we don’t agree”) . I must have made at least 100 dead eyes for this ship, drilled and varnished them all, 3 small holes in each, what a job.

Have almost all the rigging done, except for the rat lines on all the shrouds, full height of the ship. That’s going to take some doing, not looking forward to it, but has to be done. I made all the rope connections out of sheet metal, and bent them with pliers, then painted them black. Made the rudder and connections out of my own head, as what was shown on plans was not to my liking, so did not use it.

Guess that’s all for now folks, see you next time.   “Makin my  Boat”

Here I go again, about my latest venture at "Makin my Boat". Just got through this a.m. puting the finishing touchs on my what I call, French Custom Boat,( for about the 11 th. time, more or less,) I had an experience last night, my wife got me out of bed to tell me that my boat which was down stairts was making funny noises, trying to go. I got down stairs, and found I left the switch on that operates the servos, and the receiver was trying to find a signal. So when I shut it off, and unpluged the wires, everything was all right. Come to find out, my daughter and mygrandaughter who are visiting us, (each have cellphones) went down stairs, must have set off my boat, from their cellphone, not realizing what was going on. Its just an idea, but its all I can think of, so anyway such is that.
Just getting to know what it takes to keep a boat afloat, and have it stable I find is quite a feat, it dont come easy, at least not to me. I found that the cabin was too top heavy, made from wood that was to thick, and it had a tendency to make the boat rock to much when turning. Also found that the keeel was'nt deep enough, and that did'nt help any.
So I made some modifications to my boat. I made the keel deeper, and I built a new cabin, out of 1/8'' birch plywood ,also a new deck rail all around, a new airiel made from jewelery wire, which is much thiner then the one I had. Gave it all a new coat of paint, and there she be.
There I'm done.
Posted by Bob Crosby at 9:13 AM 1 comment:

Well here I am again, its been a long time since I last got into my blog spot, I forgot how to do it, but a little persistence and here I am.
I am going to talk about what I have been doing lately,that's why I haven't said much on my blog space. So here's what I've been doing. I did a model of Bluenose 1921 version some years back, but I did not do it right, I made allot of mistakes,because I didn't have experience or detail that could tell me the difference. Thus I was in possession of model I did not like. So It was either do it over or burn it. I did not want to burn it, so I deceided to rip it down and do it over. I took off everything,( the rigging and all), even the deck and all its fittings, and started over. I made all new masts, the booms, the gaffs, (saved the blocks,but did away with the tackle.)
I made a new deck,but I put in the pieces above the deck to demonstrate where all the ribs were, ( did not do that before ), I made everything out of oak, and made new shackles (straps) to fix all blocks to masts, booms, etc., and of course new paint. I am getting there, and will soon be ready to put on the sails etc..
But one thing I found out about model ship building, you can become addicted doing this, and a person can become sort of a hermit down there in your basement all the time. This is not good. Better to do just a little bit at a time, then take a break often if you have too. If you dont you loose reality sort of.
Anyway thats how I see it.
Posted by Bob Crosby at 8:52 AM 1 comment:

Last week I went and saw the tall ships courtesy of my son and daughter in-law. Needless to say,I was quite impressed with what I saw,especially the wooden ships. As you might know, I am a wood man,(no I don’t have a wooden leg,or am I a block head) I just like wood. Wood to me represents life until it is cut down,then it becomes dead,such as man which is alive until he gets old, then he dies. This I believe could be one reason why it is said “  that some men see people as trees”(enough on that point).

This is what I saw in the wooden ships, all the planking, all the decking, all the ribs and blocking, the masts etc., trees that were once alive, now made alive again by being shaped in such a way as to serve a meaningful purpose to please the human eye and desires. This I call amazing.

Steel on the other hand is all man made, as it comes from the earth and man puts it together to form any shape that he desires. Now I’m not against steel as I use allot of it myself in one form or another, but what I am saying that there is a difference in a  wooden ship , and one made of steel, I don’t sense the same character as I do in wooden ships.

Anyway that's how I see ships. How do you see ships?

Posted by Bob Crosby at 8:11 AM No comments:

Havent been on my blog for quite awhile as I have been busy with equipping the motor launch with radio controlled servos for steering, and motor control. Also had to install the the motor in such a way that it would line up with the angle of the drive line,so as to eliminate vibration which I don't want .

Also had to consider waterproofing where the cabin fitted on to the deck. Needless to say that the cabin I had did not work,so had to rebuild a new one directly to the deck where I was able to waterproof the joint so water wont get in. Everyone knows what could happen when water and electricity come together don’t they. Also developed a steering mechanism for dual rudders from one servo, and am happy to say it really works.

Its no easy job building a boat that wont sink,incidentally I tried my boat out in a little pond in my back yard, and it doesn't leak. I’m one happy camper.

Posted by Bob Crosby at 2:58 PM No comments: 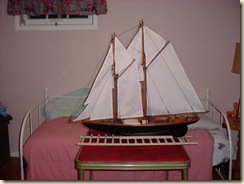 Needless to say I have since learned that the proper way to build a model, is to have a good plan with lots of details and a list of materials. You have to visualize scale, what would the real thing look like, compared to what you could make say from scratch. It has to look  real only small scale,( say 1/4”= 1’-0” ) You have to think of your self as being only one  and a half inches tall, that is if you are six feet tall in reality. This takes some doing, but it can be done.

Posted by Bob Crosby at 2:32 PM No comments: